Two years have passed since the establishment of the CrimEx group in Madrid in 2017. Within this timeframe, the CrimEx, composed of medium to high level judges, prosecutors, and advisors from the justice ministries, has held 8 meetings and two special sessions, during which it has accomplished an exceptional work. The 9th CrimEx session was the last session organised under the current phase of the EuroMed Justice IV project. It therefore constituted an opportunity to take stock of the work accomplished within this timeframe and to reflect on the future of the CrimEx. 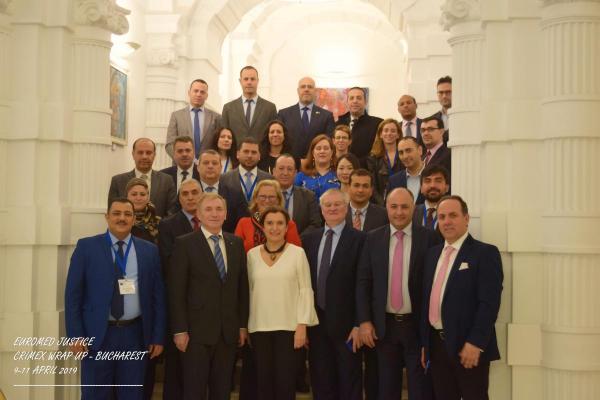 Against this background, the 9th CrimEx session held in Bucharest on 9-11 April 2019 discussed and agreed on the following issues. First, the participants  validated all the previous activities and results derived from them, especially the so-called ‘EuroMed Justice Tools’, namely the CrimEx documents, the EuroMed Manual on Digital Evidence and the Training of trainers’ materials on mutual legal assistance in criminal matters. Some updates should be made. Second, the participants discussed recommendations and proposals regarding the continuation in the future of the EuroMed Justice process at national, regional and cross-regional levels; they likewise discussed the update and upgrade of the CrimEx Docs and Digital Evidence Manual with the most recent legislative modifications adopted at national level; and, the improvement and assessment of the CrimEx activity. Finally, the participants discussed the modernisation of the Council of Europe Convention on Cybercrime and the extension of its scope at international level, with the support of the CyberSouth-Council of Europe representative

As in all CrimEx Sessions, besides the participants from the Southern Partner Countries, Eurojust, the European Judicial Network in Criminal matters, the UNODC, UN-CTED and the IAP attended the session and supported the CrimEx members’ discussions.